JFK Assassination and the Biggest Lie Ever Told 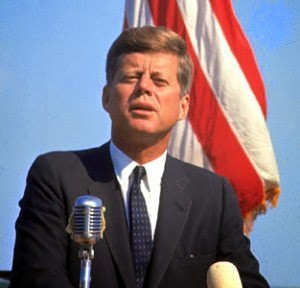 "Tell a big enough lie and people will learn to believe it."

50 years ago today, and it couldn't be more true. It takes the Order of the highest kind, contrived in the chambers of the Elite of the Elite to cover up the assassination of John F. Kennedy.

There are a million conspiracy theories of what happened that day in Dallas, November 22, 1963. All the forensic botch ups, the missing head of JFK, the physical evidence and all of the rest of the story is well known. What really blows my mind is how the American people lose their president and then accept the Warren Commission without questioning all of their crazy magic bullet theories.

Now, I don't know what happened, and I'm sure that I could call on about a dozen people who have researched the hell out of this case and hear their theories. Yet what I want to know is that with all the shoddy policework, government lies and such, how has nobody kept their government to accountability?

I would think that the Kennedys first would have demanded better explanations than they got. You can't tell me that Jackie Kennedy was accepting that Warren Commission bullshit. Yet, here it is 50 years later and it is still unaccounted for.

They say that in 3 years, 2017 that all the files of the JFK assassination will be released. They chose that date back in the 60's because they knew that everyone who was involved in the case would be dead by then.

Boy, am I ever interested in seeing what happens then....
Posted by Chuck Bastie at 5:57 PM No comments: