The Days That Are Gone Forever 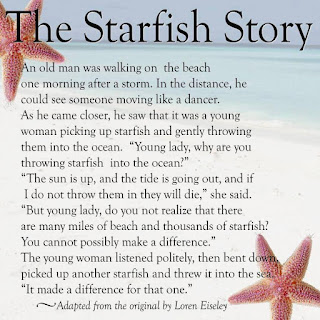 My childhood best friend's mother passed away suddenly, 8 years ago, and I wrote this note. Her death completely changed my life in so many ways. Perhaps I was naive to think that it wouldn't, but I wasn't prepared for how my life took a right turn after a loss so great. I've re-read this blog, and decided to re-post it because I think we all get caught up in the hustle and bustle of life, and sometimes, we need a gentle reminder to slow down and smell the flowers.


Even though it is more than half my life ago, I can remember special times with special people. I can remember the small things that make it like a movie in my head that can be replayed time and again. Even with all the booze trying to destroy my brain cells, I can still recall some pretty funny shit. This stuff only comes in handy these days in small doses like weddings, birthdays, campfires, and of course funerals. There is almost never a time that we do what we should've done, looking back in retrospect. We have these things called JOBS, careers, kids, wives, husbands and they take up all the time we were used to having as a kid. The life we were used to as a kid has had to be replaced with a life of no time in order to build up our nest egg to support our new life, kids, wives ect. So we sacrifice the relationships that we once devoted ourselves to in order to make time for our new life. Not many people make a big deal about it, because they are generally doing the same thing themselves and they don't notice. Months turn into years and we all lose touch slowly until a funeral comes around. We say our pleasantries that day, make fake and unrealistic comments like, "we'll have to get together soon" but both people realize that this comment is a polite way of saying, "We just don't have the time anymore, but it was good to see you again" Just like good little North Americans do. We work and slave and sacrifice to be bigger and better. I think European and Latin American lifestyles have it right and we are wired wrong. They enjoy relationships and living life, whereas we promote work and material possessions. And of course, everyone knows about this thing called DEATH, but we all think we are smarter than it is and are always content on trying to cheat it. But guess who wins this? I wish that we were constantly reminding ourselves about the things in life that really matter. Friendships, amongst the most that I value in my life. Family, which supports and loves us. Jobs sustain us, but love passion, fun....These are the things that make us. I would rather be poor and love with passion, than be rich in a mansion with no one to share it with. Touch somebody's life today. It may not be there much longer, and live each day like this....
Posted by Chuck Bastie at 7:33 AM No comments:

You're Not Who You Think You Are 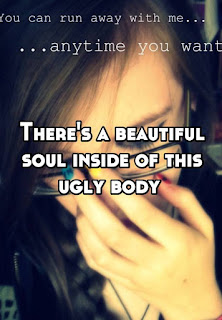 Imagine you are at a costume store because Halloween is coming up. You've been invited to this massive party, and EVERYONE is going to be there wearing a costume. So, a week before, you choose your costume, and then wait for the big day. Let's call it your birthday ;)

Then the big day comes! You head to the party, and of course, nobody recognizes you. So you begin having conversations. Perhaps these conversations begin based of your respective costumes. But slowly, you begin to see that people interact with you based on your costume. You attract a certain type of tribe because they relate to you as if you ARE the costume you are wearing. Commonality breeds acceptance and comfort, right? But are you the costume that you are wearing? Well, that's absurd. It's simply a costume, an avatar, a role playing experiment for the party, right?

So what would happen the next day if you woke up from the Halloween party, and you couldn't take off the suit; you're actually stuck with the costume for the rest of your life! What if I was always destined to look like this? 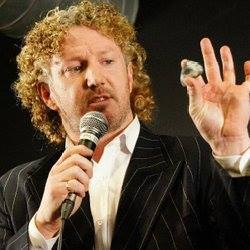 Welcome to the world of being human.

You see, I'm not the costume I am wearing. The costume I'm stuck with (for this life) looks like a white guy with curly hair, blue eyes, stands about 5'8 tall, and goes by the name of Chuck Bastie. These have been some of the traits to my identity, none of which, I chose. In fact, because of these traits, I have been teased for being too short, having bad hair, and the list goes on and on. When I actually believed that I was the body I resided in, this teasing hurt my feelings. They caused me to feel badly, and bruised my ego. It caused me to feel unaccepted, and an outsider. Then came a new perspective, which changed my view of who I thought I was:

I am not the body I reside in.

Just like being the driver in a car I lease every 4 years, I am not the car I drive. I don't relate to myself as the car I lease, but rather the soul who drives it.

Souls are NOT human. They don't have gender, race, skin colour, religious beliefs, or sexuality. Just like water, a soul takes on the form it's placed in. And this time around, I was placed in a vessel which looks like what I see in the mirror. And when this body gets tired or dies, I will leave this body, and people will say, I died. But "I" will live onward. The shape of what I will look like is yet to be determined. However I believe I am not the body I used for this time on earth. That body was simply a vehicle. I understand to not get attached as if it were "me", because I am so much more than the body I reside in. 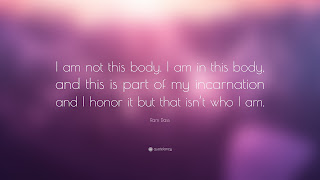 So if someone called you a name which reflected the costume you were wearing, wouldn't it be silly to react as if you were that costume? This is a manner in which I can release my identity, and not take things personally. So if anyone calls you a racist or sexist slur, you can laugh at them for believing you are what they see you as.

In fact, this is how I look at every human being. Most people actually think they are the costume they are wearing. They take things personally, and become really significant about their identity. But I think the most workable way of looking at this is to release the thought that you actually are, what you've been born as.

Imagine if everyone adapted this as their belief system. There wouldn't be any racism, sexual discrimination, or religious wars. We would all understand that we're all connected as the same particles of star dust, appearing in different roles life after life, using the experiences we encounter to develop the character we need to move on to our next grand entrance.

Now, I'm quite sure that this theory of mine isn't true. But neither is the one I was taught. And if I'm going to believe a mis-truth, I'm certainly going to choose one that works better. And the story I was taught about heaven and hell, religion and identities, is a shitty version with a horrific result. So I'm changing it. I'm changing it to view each and every person as the driver, or soul inside of the costume they are wearing, and honouring them as such. I'm not going to relate to them as to what my eyes see, but rather what their character demonstrates.

And anyone else who wants to live their lives differently is welcomed to it. I just know that my life has more acceptance for people without the limitations, and labels we put on them. I think I had it ass backwards.

Instead of treating people in this manner, I think the biggest compliment you can give someone is connecting to their soul, not to the body which drives it.

Posted by Chuck Bastie at 12:47 PM No comments: