Love Will Save The World

I remember watching the movie, "Invictus" with Morgan Freeman, and Matt Damon. It was a movie that brilliantly used the theme of the 1995 World Cup of Rugby, and incorporated the story of post-apartheid South Africa with Nelson Mandela. It was a great movie so many reasons. Yet for me, one reason more than others.

One of my favourite scenes from the movie, (and there were many to chose from) put Nelson Mandela in a position where he was reasoning to his people. Mandela had just won the election, and was elected the first Black leader in the history of a country that openly celebrated racism. Yet what Mandela was explaining to the Black population was incredible. He was telling the Blacks that this wasn't the opportunity to lash out against the white people who had oppressed them for centuries. I'm quite sure a lot of Black people voted for Mandela so that he would do exactly that. But Mandela knew it was power, not force that provided the ability to grant forgiveness. His higher Love for his country came before his ego.

I can only imagine the restraint Mandela must've had to exercise. The whites imprisoned him for 27 years of his life, and shattered all of his family relationships. All of this was taken away from him. Now as Prime Minister, he had the power to exact his revenge, and he chose not to do it. Furthermore he asked that if he could do it after everything that had been done to him, the Blacks should too. When Mandela was elected, the white population was terrified. It was their worst fear that Mandela would treat them with the same contempt, as they had treated the Blacks.

The same can be said of the white, patriarchal society today. It fears a feminism movement which will treat them with the same contempt they have treated Women for thousands of years. But like Mandela's choice, Women must not use the same aggressive, masculine energy that men have used to abuse their power. Instead, the divine feminine must prevail so the healing of mankind can flourish. The human experience is broken because of the aggressive masculine actions of fearful men, and it cannot be fixed with the same aggression. Only the power of Love and forgiveness can do this.

This affects the liberal mentality as well. Just as certain that the far right doesn't work, neither does the hurt and abused left wing. The governing energy needs to balance itself in the compassion and empathy of the human experience, and not take its place in the divisiveness of human identity.

Human identity is the basis for all division. It attaches one's self to a religion, a nationality, a language, a team, a political party, a skin colour, and the list goes on and on. This is the game that's endured for thousands of years. It's safe to say that if it could've worked, it would've worked.

The left can't be any more defended than the right. It now has to land on the balanced energy of left and right, black and white, feminine and masculine and it has to be anchored with Love, not fear.

So when equity and equality finally shows up, it needs to be met with compassion and understanding, not with contempt and bitterness. Just like what Lincoln said about the civil war...

"With malice toward none, with charity for all..." 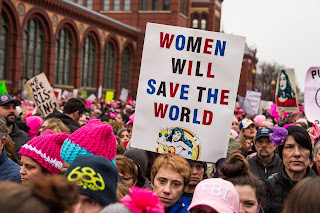 Posted by Chuck Bastie at 9:16 PM No comments: